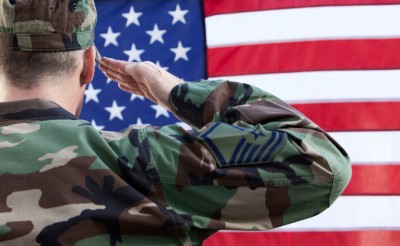 Published in the Issaquah Press

In the most inadvertent way, the St. Louis Cardinals might have saved Jack Yusen’s life during World War II.

Had Yusen not correctly identified the baseball team that won the 1944 World Series, his rescuers might have dismissed the group of USS Samuel B. Roberts survivors, taking them for the enemy.

“But they heard ‘St. Louis Cardinals’ and they came right to us,” Yusen said.

Retirement community University House Issaquah is home to 28 veterans, and a few of them, including Yusen, sat down with The Issaquah Press to share their stories of valor, ahead of the Veterans Day holiday.

Yusen served on the destroyer escort before Japanese forces sunk it in the Battle of Leyte Gulf, one of history’s largest naval battles.

The crew was forced to abandon ship when it literally broke in half, Yusen said, but even greater dangers awaited them in the shark-infested Philippine Sea.

Yusen recalled feeling a shark swim past his leg one morning. He didn’t know it at the time, but his life was most likely spared because he fell into the water where the ship’s oil spilled.

“The other guys on the other side jumped in the fresh water, that’s why we lost a lot of guys, because the sharks don’t like oil,” he said. “But when the sharks found the other guys, they were clean; those were the guys that were killed.”

About 120 USS Samuel B. Roberts survivors clung to three lifeboats for 50 hours before they were eventually rescued.

Yusen doesn’t consider himself a hero. That honor goes to the men and women who didn’t return. The survivors take that to heart, he said, using their daily actions as a sort of tribute to the fallen.

“All of us who survived, and there were a whole bunch, almost all of us came out, got good jobs, were nice guys and had a nice family,” he said. “Everything we did, we did well, to show the boys who didn’t come home that we were thinking of them.”

Even as a youngster, Yusen said he knew he wanted to join the U.S. Navy. Now 87, he still exudes reverence when talking about his service to the country, proudly wearing a hat that bears the USS Samuel B. Roberts name.

Harold Bressler
As the son of Ukrainian immigrants, Dr. Harold Bressler understood more than most the value of the freedom he fought for in his time with the U.S. Army during World War II.

“My parents came from the Ukraine and my father was a farmer in Odessa,” he said. “My father never knew freedom until he came here.”

Studying to become a doctor, Bressler hadn’t finished his education when he was inducted into military service. He served as a technician doing blood work, before he was shipped overseas.

Bressler spent about 18 months in Germany, doing medical work and caring for the injured.

“I took care of wounded soldiers,” he said. “You had to sew up and do surgery on people who were just filled with shrapnel.”

After returning home, Bressler continued his education thanks to the GI Bill, he said. He eventually became a podiatrist.

“I was giving back what my country gave me,” he said of his time in the service. “If I wasn’t living here, I would never have been what I am.”

That’s why he said he takes Veterans Day so seriously.

“We need to remember the fact that these veterans gave up a lot of their lives to keep our freedom,” he said.

Pete Peterson
Exactly one year after the attack on Pearl Harbor, Pete Peterson enlisted in the U.S. Navy where he served as a radio operator, and participated in the war’s last two major battles.

He engaged in the invasions of both Iwo Jima and Okinawa. His most memorable moment, he said, came during Iwo Jima, when he witnessed the iconic flag rising from offshore.

“The fact is that was the second flag they raised, the first one was too small, so they went back to get a bigger flag, and that was that,” he said.

The picture depicting six men placing a flag atop Mount Suribachi is one of the most recognizable images of war.

Peterson said it was “scary” participating in such iconic battles that play major parts in U.S. history.

“No matter what you are, when you see great big battleships, with their big guns, whistling as they go by, it’s something else,” he said.

After the United States dropped atomic bombs on Hiroshima and Nagasaki, Peterson thought he would get to go home.

Just a few months later, though, he was assigned to the redeployment of Formosa, now Taiwan, to assist in the transfer from Japanese to Chinese control.

“I had almost as much travel time after the war was over, as I did during it,” he said.

Veterans Day is all about recognizing the men and women who saw a need, and did something about it, he said.

“It means to be proud that you served the country when it needed it,” he said.

Jim Bothel
U.S. Army veteran Jim Bothel never went out of the country and never shot at anyone during his World War II service.

In fact, he calls his marriage to his wife the highlight of his three years with the Army.

“I had been courting my wife for five years, and right after I got commissioned we got married,” he said.

Bothel had just graduated from Washington State University with a degree in chemical engineering, when he was put on the top secret biological warfare project.

At a development plant in Maryland, then a manufacturing facility in Indiana, Bothel said researchers studied ways to make people very sick.

“The strategy was that it takes more people to take care of a sick person than it does to bury somebody,” he said. “So if you could make people sick, you’re tying up two or three or four people, but if you shot them, it doesn’t take anybody after that.”

It was purely a defensive strategy, Bothel said, and the United States did not intend to initiate the use of biological weapons, but the country had to be prepared, because they knew other nations had those agents.

The project was so top secret, Bothel could not tell his wife what he was doing. Shortly after the atomic bombs were dropped, though, she knew.

“I had been out at the YMCA swimming, and I came home and my wife said, ‘I know what you’re doing out there now. It’s biological warfare,’” he said. “She was astute enough to know that that’s what I was doing.”

Bothel said he knows he was fortunate. Most people were away from their families for two or three years, and some didn’t even return.

“I went where they asked me to go, and did what they told me to do,” he said. “I’m not a hero, but everyone was doing something, and that’s what I did.”