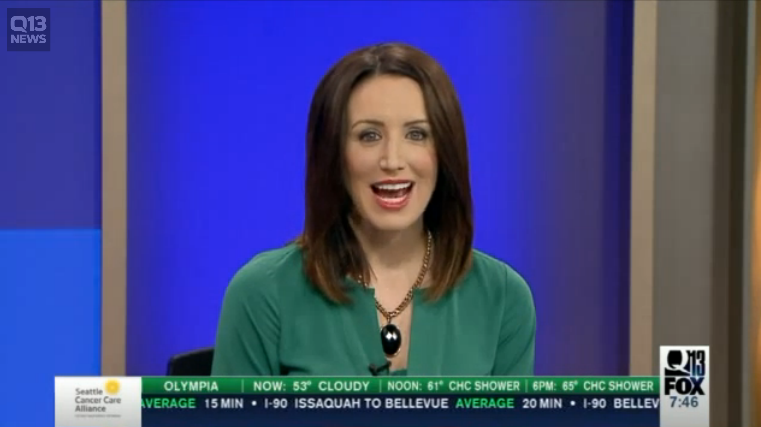 The Wisest Generation: A conversation with Kaci Aitchison at Q13

Recently several Era Living residents at Aljoya Mercer Island were invited to participate in a television news series entitled The Wisest Generation. The stories in this series were broadcast on Q13 News.

The feedback we have received, in regards to the inclusion of Aljoya Mercer Island residents, has been overwhelmingly positive. As a result we want to share the stories here.

We asked Q13 News Anchor and Reporter, Kaci Aitchison to share some of her thoughts on The Wisest Generation series and what she hoped Aljoya residents might help convey to the community at large.

A CONVERSATION WITH KACI AITCHISON ABOUT THE WISEST GENERATION

A: My grandparents on both of my parents’ sides of the family were great and I was very close to them. Some of my favorite memories involve my grandparents. On my father’s side of the family, there were times when his parents were so close to us that they felt like my own parents. My grandfather passed away. I kept in touch, of course, with my grandmother, but did not see her as often.

Through college and my twenties I was very busy. About a year ago I pulled out a box of cards from my grandmother. It broke my heart to read her notes because I realized I had allowed my schedule to be an excuse for not making more time to see her. I have many regrets over that, and those regrets specifically are why I wanted to do this series. I can’t go back and make it right with my grandparents, but I can try to make it right with other grandparents!

There were many questions I never got to ask. In the cards my grandmother sent, she wrote ‘come and see me when you can.’ I realized that we don’t ask people with decades of experience in this life for their advice, to share our history and what they think about current events. I started this series because I think we need to hear from the grandmothers and grandfathers out there, their wisdom is so valuable.

Q: Is there a single lesson that you have learned from doing The Wisest Generation series? Or, are there new bits of wisdom that you had not anticipated?

A: The biggest thing I realized is that not a single person who I have spoke with has regrets. No matter what their background, or socioeconomic standing, and I’ve talked with a diverse group of older adults, everyone seems to have an understanding that life does not owe you anything. You cannot control what happens to you in this life, but you can control how you respond. Everyone I have talked with has taught me that contentment and happiness are in your own control. Being content with your life is a choice.

Q: Has this lesson about contentment changed the way you perceive things?

A: It’s funny, because my coworkers and I have talked about this. We all realize that it [contentment] is an important lesson.

I would say that I look at life differently now, with new perspective. I spend less time on my woes, figuring out who or what is to blame. Instead, I spend time accepting what is, and trying to be present in the moment.

I think that’s another lesson for our generation from The Wisest Generation; for those of us in our 30’s to 50’s, I think we spend a lot of time thinking about the future, about doing what’s next. The older adults I spoke with showed me the importance of being present right now. When I sat with them they knew how to be completely there in the moment, with me.

Then, they taught me don’t assign blame. Accept your circumstance and work with it. No matter who they were or where they are from, every single older adult I talked with was most proud of the adventures they had experienced in life – whether they had traveled far and wide, or created something interesting at home. And, all expressed that their relationships with family are the most important thing they have.

Q: How was The Wisest Generation series received by your viewing audience, and by your colleagues?

A: Actually, we heard from more viewers than we anticipated. Many of them shared that the stories inspired them to sort of hit the reset button in their lives. They wanted to reconnect with family, and were re-establishing their priorities and relationships. Many are spending more time with a spouse, or making plans to meet up with family members and friends they have not seen in a while.

Q: Are there plans to make The Wisest Generation an ongoing series on Q13?

A: There really isn’t a timeline or end date. So it will continue indefinitely. The hardest part about telling these stories is deciding what not to include. I get to sit with these amazing people for about an hour and hear their stories. Then, I have to take pieces of those conversations to create a two to three minute story. There is so much I want the audience to know.

Q: Are there any final comments you wish to pass along to our readers?