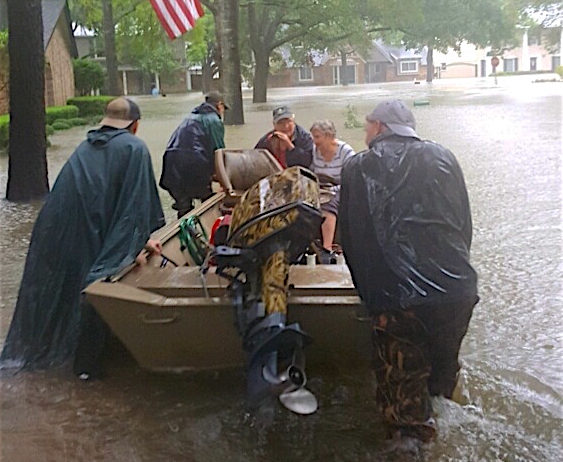 A Story of Perseverance

Hurricane Harvey walloped Houston. In six days, 27 trillion gallons of rainfall was recorded. Nearly 100,000 people had to be rescued, including Nelda and Roberts Lincecum.

“We did not live in a flood plain,” says Mrs. Lincecum. “When the water was released from the dam to save downtown [Houston] it flooded our neighborhood. Within two hours my feet were wet standing in my kitchen. So, I went upstairs.”

First, a friend came by to tell the Lincecums to leave. They thanked her for thinking of them, and decided to stay comfortable in the upstairs portion of their home. Mrs. Lincecum grabbed a jar of peanut butter and some cat food for Precious, their beloved kitty, and went upstairs.

Then, the phone rang.

“My son called to tell us to leave,” explains Mrs. Lincecum.

Her sons had been in touch with the friend who had stopped by. The water was rising. An evacuation order was in place. The Lincecums’ neighborhood was flooded with more than four feet of water that sat for 10 days.

“We left our home of more than 30 years in a kayak,” recalls Mrs. Lincecum. “Our story is one of many kind volunteers.”

After their evacuation, the Lincecums stayed with friends that first night. Then, they traveled to Dallas where they stayed with family for two weeks.

While his parents were staying with extended family, Matt Lincecum, and his wife Sara Nelson, took swift action. The couple owns the Seattle beer institution Fremont Brewing. Business ownership has taught them to be resourceful. They found Ida Culver House Broadview.

The community’s options for housing, and spectrum of care, seemed like a good fit.

“Having Ida Culver House Broadview right here meant so much,” says Mrs. Lincecum. “We immediately had a sanctuary, and that made everything okay.”

The Lincecums lost nearly all of their belongings in the flood. They arrived with some clothes and a few mementos, nothing more.

Mr. and Mrs. Lincecum think about their Houston community every day, and appreciate their new Seattle community.

“We moved from a four bedroom home to an apartment, “says Mrs. Lincecum. “We’re living a totally different life, and we embrace it.”

Mrs. Lincecum has ordered brand new furniture, and her eyes twinkled when she described how her new home will look. She loves color.

The Lincecums also enjoy overlooking the large, tree covered courtyard at Ida Culver House Broadview. They keep are several bird feeders on their balcony. Mr. and Mrs Lincecum, along with Precious the cat, love watching their friends in flight, staying in touch with loved ones via  text message, and being so close to their Seattle family. The Lincecums especially love being near their grandchildren.

“Everyone we have met here is just wonderful to us,” says Mrs. Lincecum. “People in Seattle are warm and friendly. They have just done so much to make us feel welcome and at home.”

The Lincecums say they feel especially fortunate to be spending holiday time with grandchildren this year. They recently visited their Boston-area family and made cookies with the grandchildren. And, this year, they will spend Christmas Eve and day with their Seattle family.