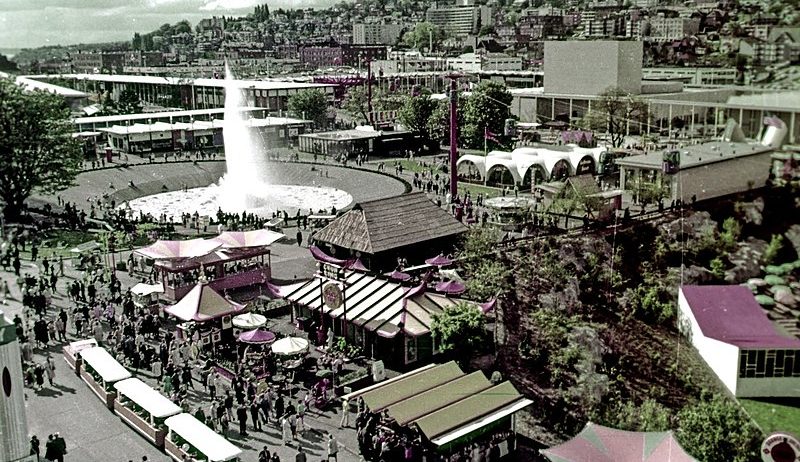 On October 21, 2018, Seattle celebrated the 56th anniversary of the closing of the Century 21 Exposition, also known as the Seattle World’s Fair. This six-month celebration of the future drew nearly 10 million people from around the globe.

One University House Wallingford resident had a front row seat to all the glamour and excitement of the event that, in many ways, put Seattle on the world map. Liesel Van Cleeff served as a hostess as the World’s Fair for its entire six-month run.

“We met everyone and went everywhere in the city,” says Liesel. “It was a very exciting time and I enjoyed every minute of it.”

A friend of Liesel’s husband, Otto, was associated with KLM Royal Dutch Airlines and had the opportunity to suggest Liesel for the job. “The fact that I was able to speak several languages, including French and German, probably had a lot to do with my qualifications,” said Liesel. “As hostesses, we greeted millions of people, many of whom didn’t speak English. We had something akin to a concierge desk on the fairgrounds and we also took VIP visitors to various sights around the city, including Pike Place Market and lavish events.”

Liesel’s ability to speak several languages was a product of her being born in the Netherlands, a difficult place to live during the 1940s. “Our family wasn’t religious, but the Nazis did their research and discovered the name ‘Van Cleeff’ had Jewish origins.”

She and her sister were separated from their parents when Liesel was just 11. “We were moving from family to family to escape the Nazis. Unfortunately, one day, they finally caught up with us.”

Liesel was taken in by train to Westerbork concentration camp, the first camp in the Netherlands, where Anne Frank also spent time before she was sent to Auschwitz. Fortunately, Liesel fared better and was sent to Czechoslovakia and then, eventually to Switzerland, where she was reunited with her family.

After the war, Liesel finished high school and then her father asked what she wanted to do next. “I want to study English at the University of Amsterdam” was her reply. Liesel’s father, being a proper gentleman, said that first, she should attend one year at a school of home economics. So Liesel went. After that year, her father asked her again what she wanted to do with her life. Her answer was the same. So off to University she went. After two years, her father said she could come home or get a job.

She ended up getting a job with Ford Motor Company. While attending a wedding of a colleague, she met a young doctor named Otto Rombouts. They married in 1957. Once Otto finished medical school at Leiden University in Holland, he wanted to go somewhere with “lots of space and mountains.” Given that the Netherlands is one of the flattest and most densely populated countries on earth, they set their sights on Seattle and Otto found a position as an anesthesiologist at Harborview Medical Center.

“We both fell in love with the area,” says Liesel. “Its natural beauty along with the welcoming nature of the people really made us feel at home.”

Liesel and Otto have two children, Ernestine and Beatrix. When Liesel was offered the job of World’s Fair hostess, Otto was concerned what they would do with the girls, as money was an issue and they couldn’t afford a full-time nanny. That problem was solved when Otto’s mother came to Seattle and watched the children while Liesel worked.

“The job was very rewarding in many ways,” says Liesel. “I got to meet so many people I would have never met otherwise and we were treated like royalty everywhere we went. It was a very exciting time for me.”

Although, after the six-month contract was over, Liesel didn’t mind going back to her “real life” in Yesler Terrace. “I always wanted to be a wife and mother and that provided its own rewards,” she says. She continued to work part-time and pursued another passion of hers – singing. She was a member of the Orchestra Seattle/Seattle Chamber Singers for 40 years.

Liesel joined the University House family five years ago, when she realized she needed some help after spinal surgery. “I love it here,” she said. “It’s a beautiful place to call home.”