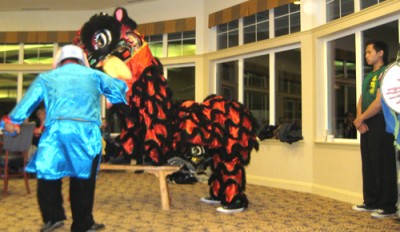 When Northwest Asian Weekly newspaper learned that many of the residents at The Lakeshore had stories to share of their Chinese (Lunar) New Year traditions from years past as well as present, they dispatched a writer to learn more.

Celebration of elders and their wisdom is a pillar of Chinese culture, and an important part of family structure.

The Lakeshore is a major destination for senior living in south Seattle.  Nearly a third of its residents are Asian American.  Many of The Lakeshore’s residents have contributed greatly to building the Seattle community at large and provide a wealth of knowledge about our recent history.

To celebrate Lunar New Year 2015, The Lakeshore’s residents had a traditional buffet dinner filled with Chinese delicacies and a lion dance to usher in the year of the sheep.

In 2014, the residents at The Lakeshore expressed particular interest in learning more about Asian cultures.  They spent the entire year exploring different points in Asian history, different parts of the continent with particular emphasis on China, Japan and southeast Asia, as well as deep study into art and cultural expressions, cuisines and customs.

To read more about how our residents have celebrated Lunar New Year though the years, please read the NW Asian Weekly article.